Eking out earlier hoaxes and self-serving conspiracy theories, the European advent of disinformation-spreading websites started in 2013. Only until 2019, dissemination of misleading pro-Kremlin information spread wilfully to achieve political aims affected 16 elections in the EU according to Jakub Kalenský‘s testimony to the US congress. In 2018, the US special counsel Robert Mueller indicted multiple Russian actors, including the infamous “troll farm” in St. Peterburg, for interfering in the US elections.

Rather than coordinated strictly in line with a “doctrine”, the machinery is fragmented. According to a big data analysis by Semantic Visions, 60% of Czech online content aimed against the country’s membership in the EU or NATO is created by 22 websites under Russian influence. Contemporary leitmotifs in the domain of deceptive information include “Western decay”, “poisonous” minority protection and “devastation of Europe” by migrants. Instead of naming concrete sources, disinformants often refer to “many experts” or say “it is widely known”. Disinformation is often spread unknowingly by influential opinion-makers. By its nature, it cannot serve to provide an “alternative viewpoint”, neither it is a Soviet-style “propaganda” celebrating the Russian government. Instead, a bulk of disinformation creates an impression that to know what is true, is impossible.

Although many EU states have been slow to expose those behind disinformation to criminal liability, much has been done. Awareness about disinformation is being increased worldwide by the Atlantic Council’s Disinfoportal. In Europe, disinformation is being tracked by EU’s Stratcom. Czech students are being educated by ZvolsiInfo. The reputation of local companies who may inadvertently be co-funding disinformants through advertisement is looked after by Konspirátori.sk. 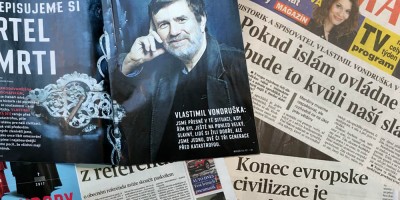